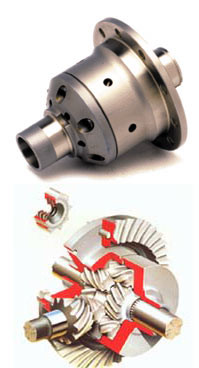 How do you really drive your 02-06 Mini Cooper S? Autocrosser? Road racer? Spirited canyon carver? If you answered, "Yes" to any of those (or all of them) then you need a Quaife Automatic Torque Biasing (ATB) differential! A Quaife (pronounced KWAF)ATB limited slip differential (LSD) powers both drive wheels of your Cooper S under nearly all conditions not just one like the OEM open differential. Your Mini's open differential shifts power to the wheel with less grip (along the path of least resistance), which means the wheel that has no grip, spins even more. A Quaife ATB, however, does just the opposite. It senses which of your 02-06 Mini's wheels has better grip, and automatically biases the power to that wheel. This power transfer is smooth and constant, and never completely removes power from the other wheel.
In a drag-race style, straight-line acceleration run, your Quaife ATB LSD equipped MCS will have close to an ideal 50/50 power split to both drive wheels. The result is essentially twice the grip of an ordinary, open differential (they don't call open diffs "peg legs" for nothing). You know the famous one-wheel burnouts? That's not going to happen to a MCS with a Quaife ATB. More than likely, your Quaife ATB equipped Cooper S will just hook-up-and-go, but if you have enough power, two-wheel burnouts are at your disposal.
More common among 02-06 Mini Cooper S owners is the desire to get more power to the ground while taking it to the twisties. A MCS will loose traction on the wheel that is on the inside of the corner, and with the OEM open-diff, power is transferred to that inside wheel, the result: No power to the outside tire that is loaded up. A Quaife ATB LSD biases power to the outside wheel, reducing inside-wheel spin. With the loaded tire getting power, you can get on the gas earlier and get your Cooper S going faster out of the corner. The 02-06 MCS Quaife ATB is great for daily commuting, canyon carving, autoxing or club racing. MCS owners won't have to put up with locking mechanisms or spools (common in other types of LSDs) that tear the steering wheel out of your hands when the LSD activates while cornering. Because it behaves like an open differential during ordinary driving, street drivers will have trouble telling it's there until the Cooper S is really pushed to it's limits. Quaife ATB differentials have been proven to work in everything from SCCA racing to Formula 1. It provides autoxers with such an advantage, it has become a prerequisite for a winning Mini Cooper S.
The Quaife ATB also controls loss of traction when the front wheels of your 02-06 Mini Cooper S are on slippery surfaces such as ice, snow or mud, providing the appropriate biased traction needed to overcome these adverse conditions. The Quaife differential provides constant and infinitely variable drive to your Mini's wheels. Power is transferred automatically without the use of normal friction pads or plates seen in other limited-slip designs. The Quaife's unique design offers maximum traction, improves handling and steering, and puts the power where it is needed most. A definite advantage whether your Mini Cooper S is on the track or on the street.
Quaife ATBs are extremely strong and durable and since the 02-06 MCS Quaife ATB is gear operated, it has no plates or clutches that can wear out and require costly replacement. Every Mini Cooper S Quaife ATB differential comes with something else other brands don't have: A Limited Lifetime Warranty. This warranty applies even when used in Minis that are raced!
This is a special order item

This product hasn't received any reviews yet. Be the first to review this product!