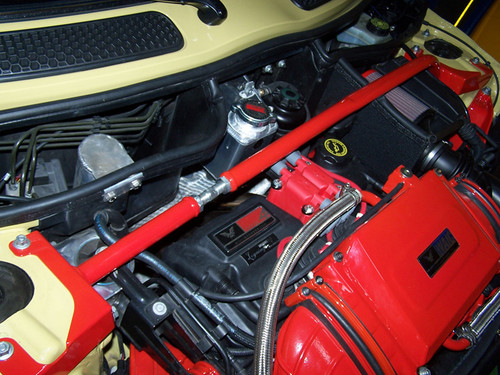 Born on the track, the Madness MINI Cooper R53 Strut Brace allows suspension geometry to remain unaltered in hard cornering while improving feedback to the driver.

The Madness MINI Cooper Upper Stress Bar features an adjustable pre-load feature critical to the stress bar's function. By adding tension between the shock towers you eliminate any flex that may occur during hard cornering. This is the function and job of an upper stress bar. Most units on the market are purely cosmetic offering no strut tower or chassis strengthening. Simply put, without adjustable pre-load your bar is purely cosmetic. You deserve better handling as well as great looks.

I added the Madness strut brace to my `05 MCS, with Madness lower brace already installed. I like it - it's staying there. It works well, and at a reasonable price.

The brace goes on in a couple of minutes, as it only uses two bolts of the three on each strut-top mounting point. It does not depend completely on the pinching friction of the bolts for horizontal positioning, as the welded attachment head folds down around the sides of the strut-top mount, thus giving it very solid metal-against-metal pressing against the rounded "corners" of the strut mount, where it is stiffest. It does not pretend to harden the MINI shock mounting points by putting a thick plate on the wrong side of the mounting as some strut bars do.

The Madness brace also has a pre-tensioning device toward the left side, which ensures that the brace is actually exerting resistance against the mounting point. Some strut braces omit any way of adjusting this while installing the brace. Once installed, the Madness brace is very solid - if you thump it with a fist, it's like hitting a brick wall - it's very solidly attached to the car, and doesn't vibrate at all once you have it tightened down.

The effects of this brace are about what you would expect, and the same as any preloaded strut-top brace in a MINI; a great improvement in handling and a slight reduction in noise inside the car.

Bottom line for me is that I'd much rather have the two Madness braces than any other costly strut brace alone. The Madness products are meant for function, and they work very well, particularly at their moderate price.

This product hasn't received any reviews yet. Be the first to review this product!