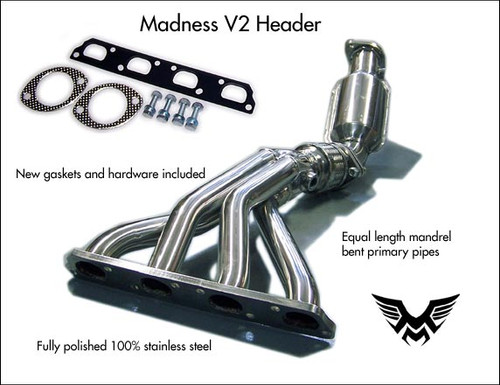 The MINI Cooper O.E.M. header incorporates four short, varying lengths, 1.25-inch primary pipes attached to a tiny, restrictive collector and flexible pipe section. This is followed by two 400-cell catalytic converters in tandem, offering an approximate 45% flow area, connected by 2.25-inch pipe work. This arrangement, in terms of performance, is inefficient. Unlocking power from the MINI Cooper involves carefully tuning the header to work with the MINI's engine and the Eaton supercharger of the "S". The Madness MINI Cooper V2 Header incorporates four maximum, equal length, 1.50-inch primary pipes, mated to a straight pipe. This arrangement is the performance ideal. The two original O2 sensor probes are retained in their correct positions for the proper operation of the OBD II (On Board Diagnostics II) system.

Performance- Air flows from an area of high pressure to an area of low pressure. The bigger the pressure differential is, the more air that will flow (and faster). This is a physical law. Optimal airflow rate is achieved when the low pressure is at vacuum.- The quicker the exhaust gases are expelled from an engine, the quicker combustion gases may enter it. A more efficient burn results in higher performance. - Careful tuning of back pressure levels and gas-flow velocity rates, via manipulation of the primaries and collector, induces this desired vacuum effect, whereby expelled exhaust gases are rapidly sucked out of the engine. - Accelerated gas-flow minimizes engine-bay temperatures by dissipating heat more effectively. This is particularly important for improved performance, as cooler temperatures boost engine efficiency.

Primary Pipes- Increasing the diameter of the primary pipes from 1.25 to 1.50 inches increases the internal flow area, allowing for a substantial improvement of the flow-rate and velocity of the exhaust gasses.- Expelled exhaust gases pulse out of the engine. By increasing the primaries to be of equal and maximum length, a smooth, unobstructed gas-flow path is offered. This results in an improved and constant pulse effect at lower revs, leading to an increase in low/mid range torque.

Collector- Increased collector length offers a larger internal volume, allowing for better merge collection of the expelled exhaust gases (after the 4 primaries). - Improved merge offers little resistance, enabling a reduction of the gases backing up to the engine. This results in lower back pressure levels, allowing the engine to breathe and perform better.

Secondary Pipe Work- Enlargement of the diameter of the secondary pipe work (between the flex and and the straight pipe from 2.25 to 2.50 inches increases the internal flow area - enhancing flow-rate and velocity of the exhaust gases even further.- Improved velocity and volume-entry rate allows for more outright performance.

Superior Construction- The performance characteristics of a supercharger result in major heat discharge which may cause inferior headers to lengthen. However, Type 316 stainless steel has the ability to withstand these fluctuating heat levels while performing as normal.- T. 316 stainless steel's ability to resist corrosion and maintain its strength at extreme temperatures makes it the only material suitable for a Madness V2 Header. - Only rigorous testing and development dictates the type of materials used.

Header Flanges- A single piece, 10mm thick, stainless steel Header flange with enlarged openings allows for greater gas flow if the cylinder head is to be ported.- The laser-cut manufacturing process guarantee's that flange #1000 is as accurate as flange #1.

O2 Sensor Bosses- Unique, thick-walled, stainless steel O2 sensor bosses can withstand temperatures in excess of 1900Ã?°F, and will not distort. Conversely, regular thin-walled bosses expand and cause the threads to bind - rendering renewal of the O2 probes near impossible.- O2 sensor positions remain unchanged from the original equipment, allowing for the proper operation of the OBD II (On Board Diagnostics II) system.

For racing and off road use only